In the year in which the National Stadium celebrated its 75 years of existence, several important interventions were planned for the Centro Desportivo Nacional do Jamor (CDNJ), with a view to improving the conditions of this sports complex.

Alongside interventions that have already been announced, such as the passage of the EVA - Green and Blue Axis through the Jamor space or the renewal of the number 1 athletics track at the National Stadium, there are several other interventions, some already completed, others planned and others still in progress, which should be made known.

The aim of these interventions is to optimize existing resources in order to create for our users the best conditions for sports, whether for those who visit us for competitive sport or for those who are looking for leisure sport.

At the level of the Jamor Swimming Pool Complex, the year 2019 was marked by some preventive and corrective maintenance interventions, of which the following stand out: 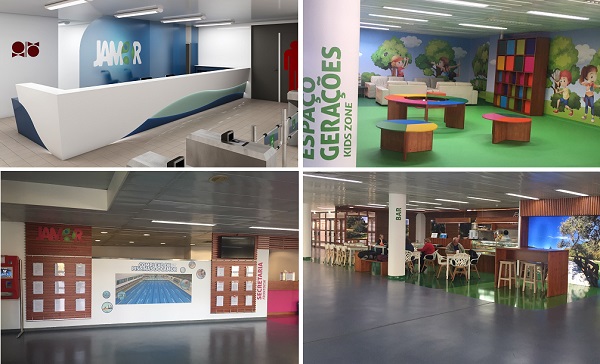 The Jamor Interpretive Center was installed in the lobby of the Swimming Pool Complex, a project conceived in the context of the celebrations of the Jamor’s 75th anniversary and which aims to enhance and disseminate the historical and cultural heritage of the entire space and structure, providing an integrated view of the entire Jamor Valley.

The track has been completely cleaned up, taking into account the natural deposition of sediments and rocks that are improperly thrown onto the track.

In the continuation of the recovery of the operating system of the Nautical Activities Track, a contract was carried out with a view to the mechanical requalification of the technical center of this installation. This work focused mainly on the pumps and the water treatment, not only for the sake of safety in the operation of the plant, but also to ensure better water quality.

Synthetic pitches have a much higher responsiveness than natural grass ones, which is due to their greater resistance to use. Converting the illumination of these fields with led technology will reduce the hockey pitch operating costs and increase responsiveness in both, and their combined energy consumption will be equivalent to that of the current hockey pitch lighting system, adding a much longer service life.

Work is also underway to give artificial illumination to the synthetic football pitch (pitch No 5), a long-identified need. This intervention will make it possible to extend the opening hours of that facility by about 5 more hours a day during the winter period.

Interventions made or ongoing regarding open spaces

This intervention, currently underway, aims to restore and level existing pavements, due to their poor condition, transforming them into safe routes and providing the space with an accessible path for specific circulation and bicycles, much sought after in this sporting space.

Regarding vegetation and, considering the maintenance of this green axis of the CDNJ as fundamental, the option was to keep as many tree specimens as possible in a total of 111 existing trees.

Considering that most of the existing trees are European nettle trees (Celtis australis), planted 75 years ago, and that are somewhat debilitated, but still have a green aerial part, it was decided to cut only 10 specimens, which were with dry parts, trunks with open wounds or dry legs, representing some risk of falling and jeopardizing the safety of users. Replanting of specimens of the same species was performed, replacing those that were slaughtered, and the tree sites in the meantime covered were rebuilt and the trees were replanted at these sites.

This proposed intervention will make it possible to regain sporting skills with great demand in the sporting framework for all and which for many years have been suspended in the CDNJ. The pitches concerned, which are close to the shooting range, were deactivated a few years ago.

This intervention will provide these pitches with conditions for basketball and volleyball. Their reconversion will increase the offer of spaces and sporting facilities available to CDNJ users, within the framework of open spaces for the Jamor for All Project.

All of these interventions confirm our strong motivation to continue to celebrate the existence of this space of emotions and to ensure that many generations continue to meet in a harmonious and appropriate way to their needs.