75 years ago, the doors of the National Stadium opened for the first time. On June 10th, 1944, in a ceremony that had 60,000 spectators and with the presence of the highest figures of the State, there began the story of what is still today the largest national sports complex. Today, 75 years passed since the inauguration, the Centro Desportivo Nacional do Jamor (CDNJ) annually receives over one million users.

After a display performed by 3,600 gymnasts, athletic events and the parade of representatives of all the national clubs and sports federations, the stadium received its first football match, in which Sporting and Benfica played for two Cups: the Empire Cup, established by the Portuguese Football Federation and which was a kind of first Portuguese Soccer Super Cup and the Estádio Cup, offered by the Government of Salazar to celebrate the occasion.

The first goal was scored by Peyroteo in the 10th minute. Espírito Santo tied for Benfica in the 77th minute, taking the game to extra time. Two minutes after the restart, Peyroteo scored again and, at the beginning of the second half of the extra-time, Eliseu made it 3-1, with Júlio getting the goal that fixed the final result in 3-2.

The event was recorded for eternity in a documentary by António Lopes Ribeiro, which can be viewed here. 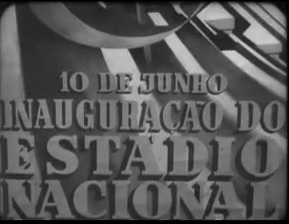 75 years later, the National Stadium remains the most emblematic piece of the CDNJ. It is located in a large urban and sports park with around 200ha, which includes various sports and leisure facilities, as well as a forest with more than 90ha.

The CDNJ serves more than one million users annually, offering a wide range of valences, available for high performance sports and for federated sports, but also for simple leisure.

Built in a time when the criteria were necessarily different, because different was the society then, the National Stadium has gone through several phases, and in recent years a series of interventions have been carried out in a discrete but effective way, responding to the need to adapt this sports facility to the current needs while preserving the historical legacy and its architectural characteristics.

In order for the project of the Minister of Public Works, Duarte Pacheco, to be a reality, several architects were consulted, among them Francisco Caldeira Cabral, Konrad Wiesner, Jorge Segurado and Miguel Jacobetty Rosa. To the latter is mainly attributed the paternity of the National Stadium project.

To serve the sports complex the first highway of the Iberian Peninsula was built. At the opening, the stadium had more than 5000 parking spaces and its own railway station.

The stadium currently has a capacity of more than 37,000 spectators, which makes it the fourth largest stadium in the country.

In 2017, it was the first stadium in the country to receive the installation of video-arbiter, and in 2018 it was recognized as apt to receive games of Liga Portugal.

In addition to numerous sporting events, among which the Finals of the Portuguese Cup, the Queen Event of our national football, are particularly prominent, the National Stadium has received over the years many other important events, such as the 1967 Cup Final of the European Champions or the opening and closing ceremonies of the 2003 World Gymnaestrada.

Particular games of national teams were held here, as well as several national championships of other modalities, but also concerts, operas and promotional initiatives, with thousands of participants, such as the Euro 2004 human logo.