SEARCHING FOR OF A 'HOME RUN'

Every Saturday morning, the Capitals team, belonging to 643 Baseball Club, has been training baseball at Jamor for seven years. A sport with little expression in Portugal, but which in the 'Valley of emotions and the meeting of generations' has a space that it calls home.

With around fifty federated athletes, the Capitals train their senior team, the women's Softball team and a handful of children at the junior level at the same time. Gonçalo Lopes, president of the club, began by thanking the way they have always been welcomed at Jamor.

“There is only one official baseball field in Portugal, in Abrantes, where the federation is also based. In Lisbon, if it weren't for Jamor and in particular the IPDJ, we wouldn't have the conditions to develop the sport. It is our home with great pride and the best there is!”, he says.

Gonçalo Lopes admits that there is no baseball culture in the country and that one of the main difficulties is precisely the infrastructure required for the practice. It takes two football fields together to have the necessary measurements. “The difficulties increase when parents do not understand the game and end up demotivating the children themselves. Also, baseball is perhaps the most technical sport out there, which doesn't help either. However, it is one of the most inclusive, as it has room for all types of people: tall, short, thin, fat...”, he adds. 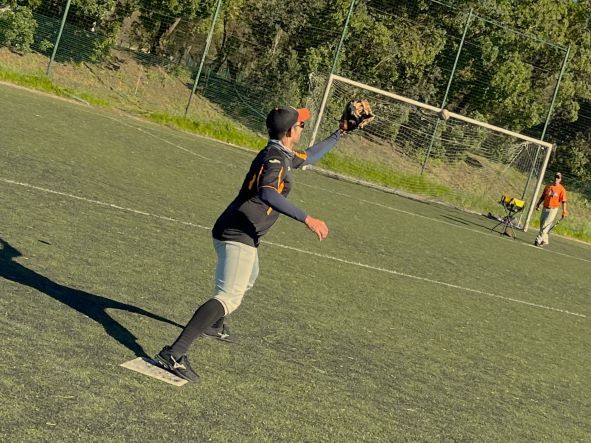 It is a sport that tests the resilience of any individual to the limit, since the feeling of frustration is right there at the turn of the swing of a shot. “You have to realize that a good batsman averages three shots out of 10! Now, for those who arrive again, hitting the ball becomes a very difficult mission. Patience is needed because Baseball is a game of routines”, continued to explain Gonçalo Lopes, who added a curious point: “Even more, it is the only sport in the world where failures are counted and registered. Nobody likes to fail, let alone to see their failures on the scoreboard! This in a culture we live in today with little or no tolerance for error.”

For those more out of touch with baseball, there is, however, a term that is common knowledge: the home run. It occurs when a stroke throws the ball out of bounds. In last season's championship, Gonçalo Lopes claims that there were only five home runs, officially recorded in a specific field. A good part was achieved by foreign players who live in Portugal and intend to maintain their connection to Baseball. We are talking mainly about Mexicans, Canadians, Cubans, Taiwanese Chinese and, most of them, Venezuelans, where Baseball is the king of sport.

“They bring a lot of quality to the game, it's true, but the development of the sport takes place through the bases, through the children that can be brought to Baseball. A shot easily reaches 120, 140 km/h and that scares anyone”, says Gonçalo Lopes.

With so many adversities in the equation, the passion for the game remains for those who practice it. João Marcelino, 16, lives in Oeiras and was doing his fourth training session. Fully equipped, he told a little about his journey: “I started with swimming, went through gymnastics, football – which was my least favorite – and played tennis for eight years. I first got in touch with Baseball through a Free Time Activity (ATL) and I thought that was what I really liked to do. However, I learned of the existence of the Capitals and decided to come and try it out. I'm here to stay!”

He confesses that Baseball can be demotivating at first – giving reason to Gonçalo Lopes' explanation –, but that the satisfaction of success trumps everything. “When I hit the ball for the first time, it was an immense joy. It is a modality with a lot of organization and I advise everyone to try it and give it several opportunities, as it is rewarding”.

On November 11, there will be a Baseball coach training course and the federation managed to call two big names from the North American Major League: Tim Leiper and Jose Montilla, from the San Francisco Giants, come to improve the knowledge of the Portuguese. “I can say that, from the point of view of training, we will be at the level of the best in Europe”.

If you want to try Baseball, the Capitals are waiting for you at Jamor!